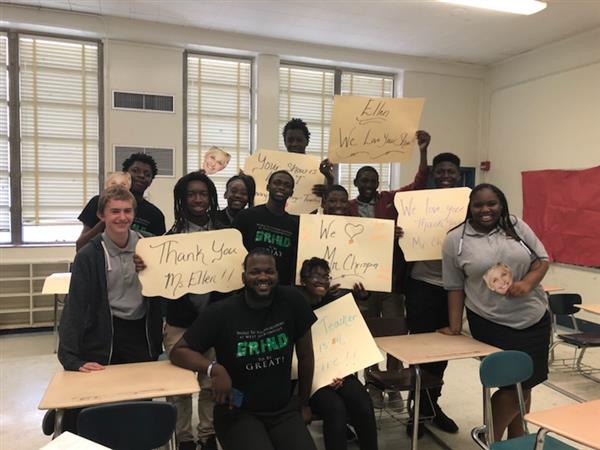 Laureen Ricks / May 8, 2018 / Middle
May 8, 2018 – Duval County Public Schools teacher Victor Chrispin was one of three teachers featured in the Ellen Show broadcast on Tuesday, May 8 in honor of Teacher Appreciation Week.
Chrispin, a teacher for the district’s Bridge to Success Academy, was literally suspended in air in the game “Don’t Leave Me Hanging” as he and his fellow educators learned they would be the recipients of $10,000 courtesy of Crayola.
The Civics teacher hid his face behind the huge check presented to him as his students cheered him on via remote video.

“Seeing  these students come in one way and have them leave another way is just tremendous,” Chrispin told show host Ellen DeGeneres. “Having the opportunity to change and shape these young people is what’s amazing to me.”

As a first-year educator, Chrispin  has already had an opportunity to change and shape his students. He is an active mentor at the Bridge to Success Academy. In addition to teaching civics, law studies, and performing arts, Chrispin has also created the “Boys to Gents” program, which helps his students afford to go to prom by providing them with formal attire such as dress jacket, pants, ties and cuff links.
The educator is also organizing the school’s first-ever Young Men’s Symposium, which will be held on Wednesday, May 16 and connect students with community leaders as they pass on both inspirational messages and practical lessons (etiquette at formal events, how to tie a tie, what to wear to an interview).
Through these programs, Chrispin says he hopes that his students are inspired to build their own bridges of success both in and out of the classroom. To learn more about the Bridges to Success Academy – designed to help students who are two or more years behind academically get back on track for graduation – visit  https://dcps.duvalschools.org/btsm. You can also watch the Ellen Show broadcast featuring Chrispin here: https://www.ellentube.com/video/ellen-leaves-three-teachers-hanging.html.
Category Middle 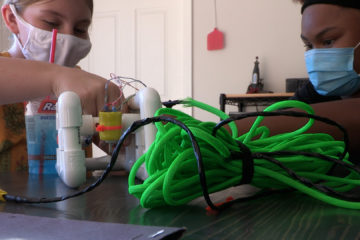