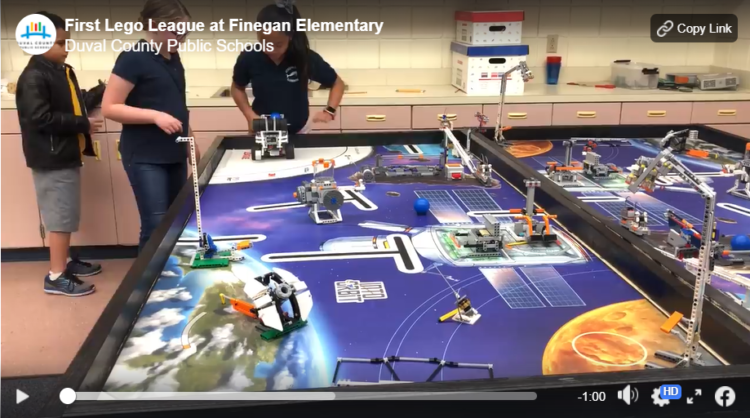 Students get into gear with First Lego League

Feb. 5, 2019 – They engineer robots, they complete NASA-inspired tasks, they talk with physical therapists about spine expansion in space, and…then they go to recess.

These future engineers are fifth-graders at Joseph Finegan Elementary School. They are one of the 56 elementary and middle school First Lego League teams in Duval County Public Schools.
The district’s partnership with First Lego League provides an opportunity for fourth – eighth graders to explore the world of engineering with robotics, coding and critical thinking skills.
J. Allen Axson is another school that participates in the First Lego League program. The school’s principal, Cecilia Robinson-Vanhoy said she has watched her students flourish over the four years her school has had the program.

“What stands out to me is that this is a program that requires children to develop skills such as team work, verbal communication, critical thinking, problem solving and computer skills,” said Robinson-Vanhoy.

Axson won the Champions Award and Best Robotics Performance Award at this year’s district competition, themed “Into Orbit.” There, students had to work together to reach a goal in two and a half minutes, like setting “satellites” down at a station by programming a robot or using critical thinking skills to solve problems that occur when spending more than a year in space.
In addition to academic skills, regional competitions encourage values like “co-opetition.” This sportsman-like conduct is something Finegan Elementary’s team took to heart during the tournament.

“We tried cheering on as many people as we could,” the team chimed in altogether.

First LEGO League is just one of many programs that allows students to get hands-on engineering experience early in their academic careers. To see a list of more, visit our article on magnet and special transfer option programs.
Category Video