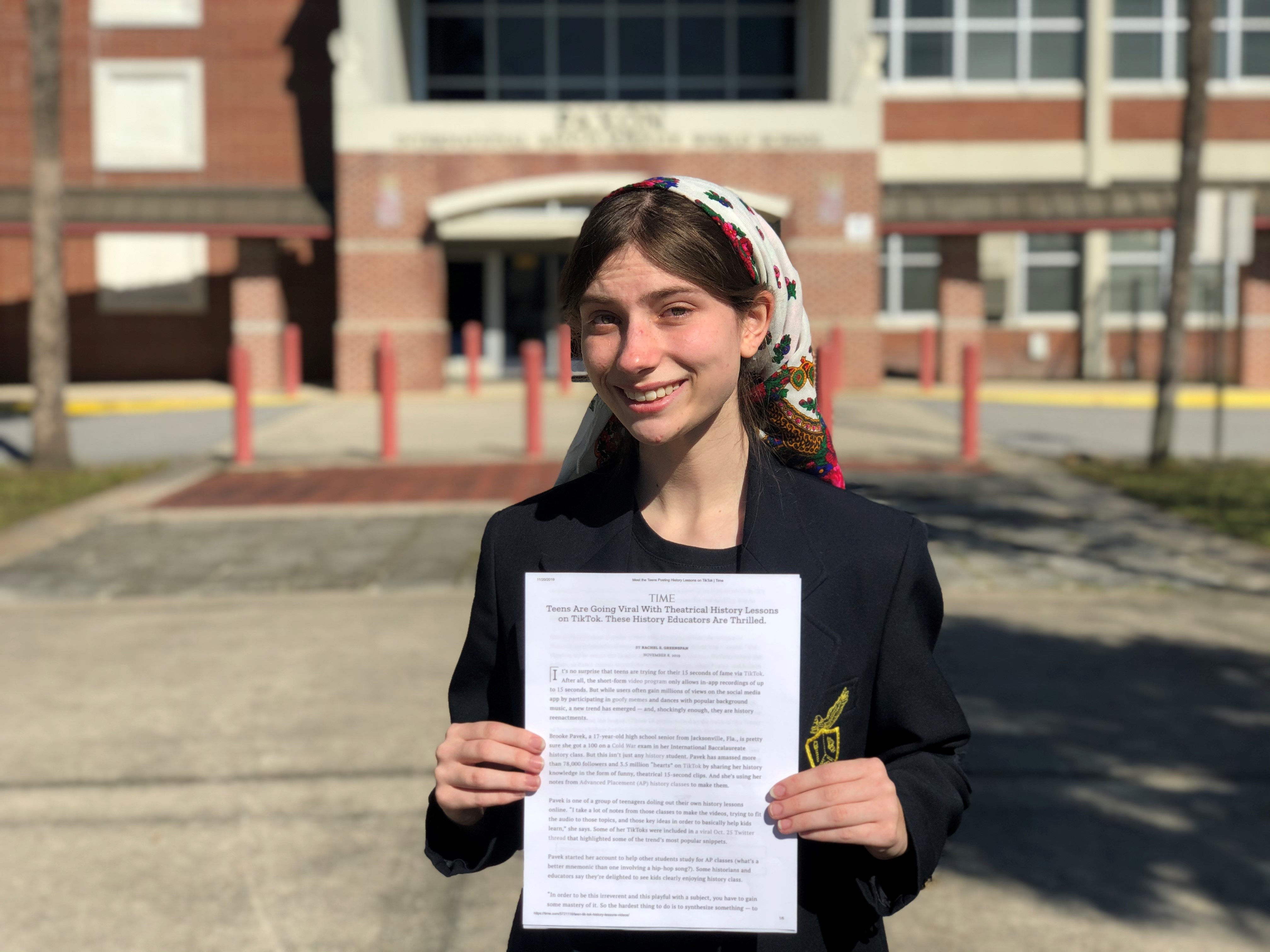 Nov. 25, 2019 -It was near the end of her junior year at Paxon School for Advanced Studies, and Brooke Pavek was preparing for her Advanced Placement United States History exam.
She knew her memory needed to be sharp in order to get a top score. She didn’t know that months later, preparing for that exam would become a memorable time in her life that would be stamped in TIME magazine.

“I wanted ways to memorize terms that I really didn’t understand, I didn’t feel like I was going to memorize them if I didn’t have a way to remember them,” said Pavek.

The 17-year old turned to “TikTok,” an app used for short videos that records up to 15 seconds. Pavek joined a growing trend of teens in posting videos of her dancing and lip-syncing to songs for history reenactments and historical facts. The videos were born inside her parent’s living room.
“It’s so much fun if you can put it with a song and make it fun versus just sitting there with a lecture and boring boards and stuff. So it’s made more kids like history and I love that because I’m passionate about history and being able to share that passion with more people,” said Pavek.
Pavek’s videos of her history knowledge went viral after she showcased her sense of humor in the theatrical clips leading to nearly 100,000 views and 3.5 million “hearts” on her TikTok profile.

Pavek made her debut on TIME Magazine’s website on November 8th after the magazine found her through a viral tweet on Twitter.
“It’s kind of out of my mind, I can’t believe it happened. I started out in March and got no likes for like 2-3 weeks, I was going to quit and thought this would never be a thing,” said Pavek.
She shared a story about one of her most popular videos explaining what happened with the League of Nations after World War I.
“There were things that really stuck in my head so when I got to my AP exam, I was smiling so hard because I was saying to myself, I made a video on this,” said Pavek.
Pavek started to gain not only local attention from her peers at Paxon, but also national and international attention on her videos as well. The rest was history.

Pavek said she’s inspired because she knows she is helping students everywhere.
“I’ve had sophomores, juniors, and seniors, all of them recognize me and tell me about things they learned from my videos,” said Pavek.
Pavek is already setting up her life on the right side of history. She is the founder of Paxon’s History club, serves as a Teacher’s Assistant for history, and is a member of the Spanish and Science Honor Societies.
The teen said she plans to use her skills to learn more about her family’s history of Eastern European, Slavic, Jewish, and Romani culture.
“My dad is really proud of me for what I’ve been doing and what my exam scores have been, and helping kids do well,” said Pavek.
Pavek’s dream job is to work as a history professor. At least one day, she’ll be able to show her students how she made history herself and landed in TIME magazine.

“I feel like I’m in this entire mass of people bringing education and making it fun, it’s influential and I love it that a small person like me, a five-foot two girl can make a big impact around the world,” said Pavek.

Click here to read TIME magazine’s feature on Pavek. See video below as an example of one of Pavek’s history lessons.
Category Uncategorized