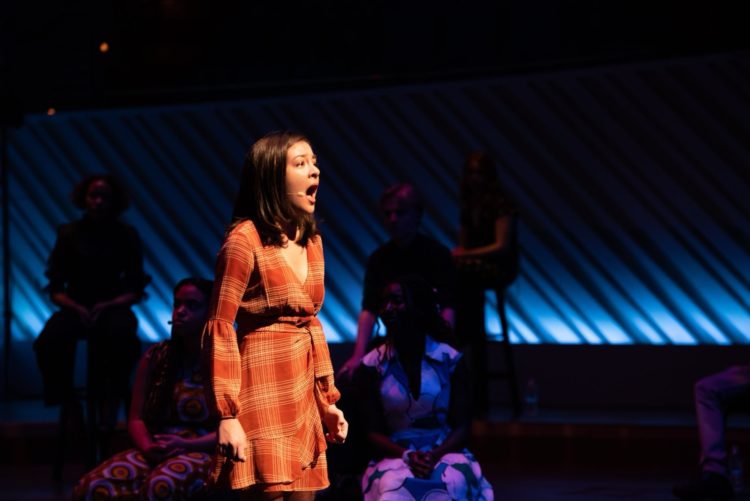 May 27, 2020 – “It must be a mistake,” thought Douglas Anderson student Mallorie Sievert upon learning she was a finalist for the prestigious U.S. Presidential Scholars honor.

“I couldn’t believe it,” she said. “I figured there must have been some other Mallorie, and they called me instead of her. I still saw myself as that little theater nerd belting Barbra Streisand songs in the side room of a community theater.”

But it was no mistake, and a few weeks later, Sievert received an even greater shock. She would be among 161 high school seniors in the nation – and among six in Florida – to be named as part of the U.S. Presidential Scholar Class of 2020.

On top of that, the self-proclaimed “theater nerd” and lover of Broadway was one of 20 to be selected as a U.S. Presidential Scholar in the Arts; and of that group, she is the only one in the Theater discipline.

“I was incredibly honored and grateful,” said Sievert. “This entire process has been incredibly humbling and surreal.”

While Sievert was surprised, her principal at Douglas Anderson, Melanie Hammer, was not.

“Presidential Scholars are young people who exemplify high achievement in academics, leadership, and community service and Mallorie is one of the purest examples of this,” said Hammer. “Beyond her exemplary academic accomplishments and dedication to theater is her amazing heart and commitment to using theater as a means to lift and unite people through the power of art.”

Sievert, who says she suffers occasionally from “impostor syndrome,” believes this honor serves as affirmation to her and her peers in the art world.

“I think it is especially hard for young artists, since there is such a stigma around pursuing a career in the arts,” said Sievert. “If there is anything I’m trying to say to any young artists in all this, it’s that no matter how insignificant you feel, keep trying and keep playing. If you love the art you’re making, keep at it, no matter what. You have no idea what can happen with hard work and passion.”

Sievert plans to attend Elon University to pursue a degree in musical theater and explore different careers in theater including playwriting, directing and dramaturgy.

About U.S. Presidential Scholars
Presidential scholars are selected annually by The White House Commission based on academic success, artistic and technical excellence, essays, school evaluations, and transcripts, as well as evidence of community service, leadership, and demonstrated commitment to high ideals.

The announcement for the 56th Class of Presidential Scholars was made May 21 by U.S. Secretary of Education Betsy DeVos.

“These exemplary young people have excelled inside the classroom and out,” said DeVos. “And, while they are facing unprecedented challenges as they graduate from high school into a world that looks much different than it did just a few months ago, their determination, resilience, and commitment to excellence will serve them well as they pursue their next steps.”

A complete list of 2020 U.S. Presidential Scholars is available at http://www.ed.gov/psp.