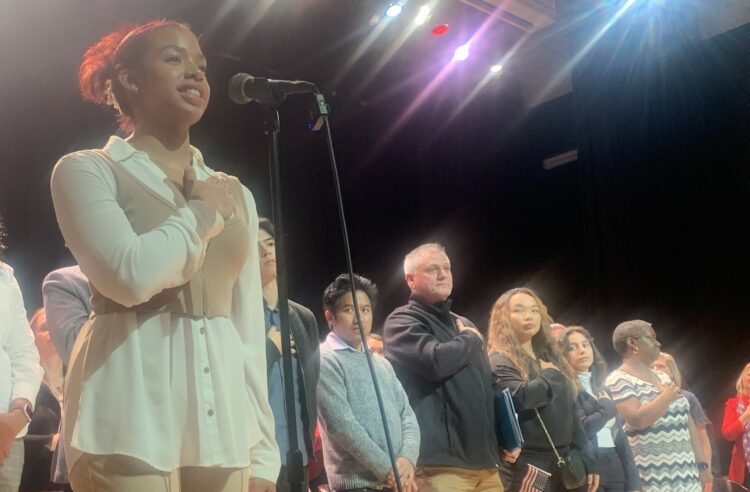 Jan. 19, 2023 – It was a civics lesson brought to life for hundreds of Riverside High School students as they witnessed 40 individuals representing 29 different countries be sworn in as U.S. Citizens.

Known as a “naturalization ceremony,” this special event took place in the school’s auditorium on Wednesday thanks to a partnership between the district and the Federal Bar Association, Jacksonville Chapter.

“They can sit in a class and learn about this from a textbook, but to actually witness a real live civics lesson in person is an invaluable experience,” said Principal Timothy Feagins.

It’s why Feagins worked with event organizers to make sure students not only had front row seats to the ceremony, but they also played significant roles.

It was students who opened the court, presented each of the applicants to the judge, performed the national anthem, and led the new citizens in their first Pledge of Allegiance to the Flag.

Lyric Hall, the student who led the citizens in their first pledge, called the moment an extreme blessing that touched a personal chord.

“It was an experience I never thought I would experience,” said Hall, a senior at the school. “To be there and to be chosen to do the Pledge of Allegiance was a powerful moment. My grandma came here in the 1980s from Cuba and has been an ESOL teacher for over 20 years here. Being a part of this, and knowing my own history, was definitely amazing.”

Hall’s friend and fellow senior, Jada Peyton, also participated in the ceremony. She performed the official “opening of court.” Peyton said this experience helped her recognize how fortunate she was.

“Being a part of it really makes you grateful,” said Peyton. “I was born in the United States, so seeing what they had to go through just to become U.S. citizens honestly makes me so grateful for my upbringing. It makes me appreciate it even more than before. I will think about this for the rest of my life.”

This is exactly what judicial and district leaders said they hoped students would experience as they observed the naturalization of applicants who hailed from a wide array of nations including Australia, Nigeria, Israel, Brazil, Syria, Costa Rica, Haiti, The Philippines, China, El Salvador, Vietnam, and Ireland.

As he presided over the ceremony, Chief Judge Timothy Corrigan discussed the long and arduous path to becoming a U.S. citizen for individuals who are not born in the country.

“You really have to want it,” the judge shared with the students, challenging them to think about what it means to be an American.

This is the second time a naturalization ceremony has taken place in a Duval County Public school. The first was in 2020 at Wolfson High School.