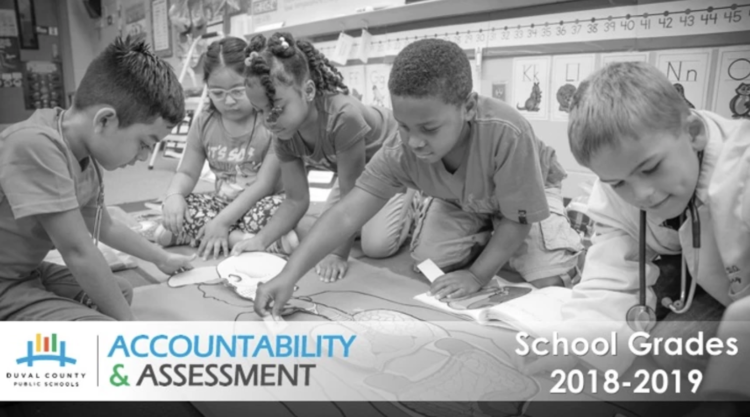 July 11, 2019 – Propelled by a record-breaking graduation rate and learning gains made by students in math and reading, Duval County Public Schools is now closer to an A than it has ever been. The district leaped six overall points, and is now just 4 points shy – less than one percentage point – from an A-rating.

“We are undeniably improving student outcomes,” said Superintendent Dr. Diana Greene. “The fact that we are less than one percentage point from an A reflects the hard work, dedication and excellence demonstrated by our students and educators.”

Individual school performances contributed to the district’s overall grade with Jacksonville Beach Elementary being a standout. The school, which has maintained an A since the year 2000, is the second-highest performing elementary school in the state.

Hyde Park is among the 62 percent of D and F schools that improved their grades this year. Additionally, 87 percent of schools are an A, B, or C with the number of A schools jumping by 11, from 31 to 42 schools. These gains offset the declines that were made, which include 26 schools dropping a letter. The number of F schools – two schools, which amount to 1 percent – remained the same.

“While we celebrate the learning gains we have made, we will not lose sight of the areas where improvement is needed,” said Dr. Greene. “These reports operate like guide posts and provide direction on where we as a district need to come together to evaluate and improve.”

The current grade release is the Florida Department of Education’s preliminary grade release. One Duval school, Duval Virtual Instruction Academy, received “I” or incomplete grade. This is a normal process in which the state conducts an inquiry into the data. Once the inquiry is complete, a valid school grade is issued.

“I could not be more proud of our students, educators and staff,” said Dr. Greene. “Do we have more work to do? Absolutely! And we will do it diligently with the mindset of enhancing student outcomes. But the overall gains made in our school district give Team Duval a reason to celebrate.”