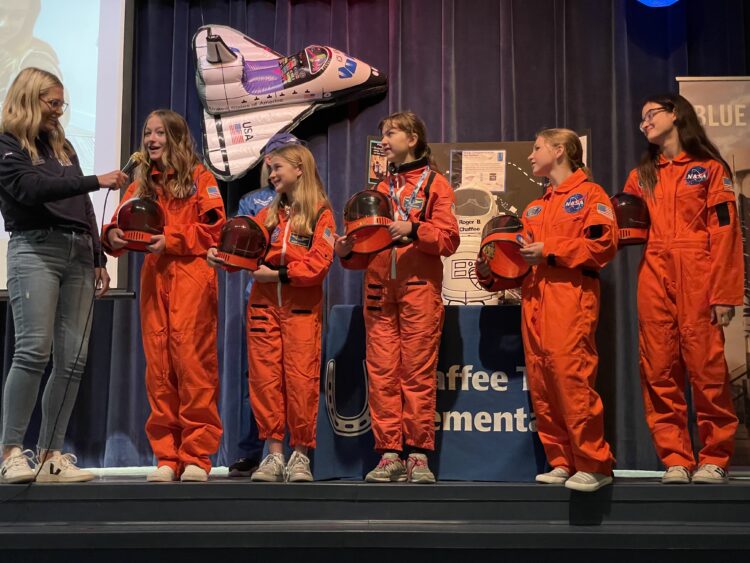 Students learn about STEM, space through live chat with astronaut

March 11, 2022 – Students across the district had a chance to learn more about space exploration on Thursday through a live chat with astronaut Laura Shepard Churchley, a passenger on a recent Blue Origin space flight and the daughter of Alan Shepard the first American to fly into space.

Chaffee Trail Elementary was chosen to host the live broadcast because its team of fifth grade students won the Space Mailbox design and engineering competition held at MOSH in February. The team, sporting NASA flight suits and helmets, unveiled their winning prototype, an astronaut-shaped mailbox, to during the broadcast.

Churchley talked with students about what it was like to watch her father train for his 1961 voyage into space and shared that she has a special connection to the school, because she grew up with the children of the schools namesake, astronaut Roger B. Chaffee.

The Chaffee Trail student team joined Churchley and Blue Origin rocket engineer Caroline Weeks on stage to answer questions from students including how the students were able to work together to design their mailbox, what kind of data is collected on space flights, and how to become an engineer.

Weeks shared her path to becoming a manufacturing engineer, including her early fascination with Legos, and encouraged students to consider the many exciting jobs that exist in the STEM field.

“Many different career paths are involved in sending a spaceship up,” said Weeks.  “Programmers, scientists, mechanics and even artists are involved.”

The live chat was presented through a collaboration with STEM2Hub, and Blue Origins/Club for the Future, an Amazon non-profit and live streamed into classrooms across the district through TEAMS, so that all students had the opportunity to participate and ask questions of the speakers.