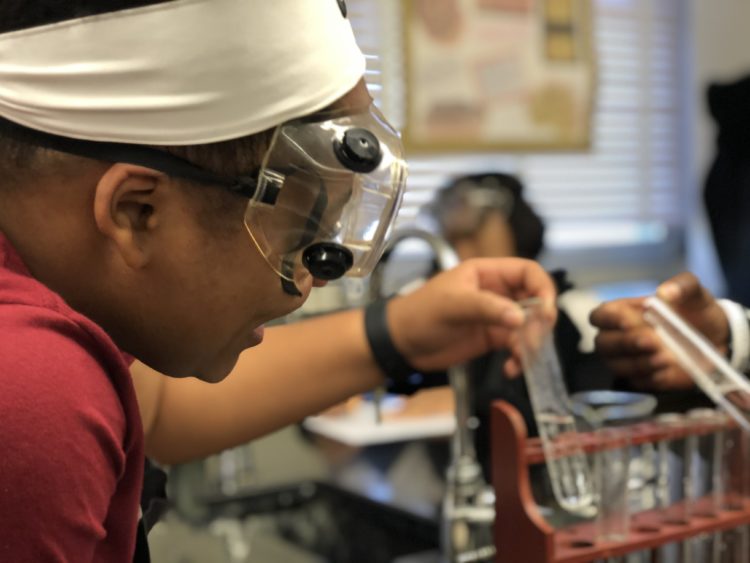 March 3, 2020- Chemistry students at Terry Parker High School are making history as they are delving into studying African American History over the course of a six-month project.

“We’re making a direct connection to the life of a pharmacist and what an African American individual went through to get to that state (as a pharmacist), and some of the injustices that they encountered in the health care system,” said Adam Ward, Terry Parker High School Chemistry Teacher.

The University of Florida’s Samuel Proctor Oral History Program, along with the co-sponsor All Y’all Social Justice Collective affords educators and students, the opportunity to be a part of a pilot initiative that examines African American oral history archives. Eight teachers were chosen to help lead the pilot program, including two Duval County teachers and six others from neighboring counties. The teachers and students are combing through more than 700 written and oral interviews from African Americans who faced adversity during the Jim Crow Era to healthcare and support issues.

“It’s huge,” said Ward. “They need to know that their culture contributed to what we’re learning.  They need to understand that there’s a lot of African American history in our content,” said Ward.

Students in Mr. Ward’s class said they’re thankful for the opportunity to learn about the local history that has helped pave the way for them to become future leaders in science.

Peterson said whenever she takes medicine or visits the doctor, she is reminded of the impact African Americans have had on the medical industry.

The goal of the Florida Black History Curriculum Project is to build a new “teacher-created” curriculum that highlights local African American history; honors those who paved the way for these students to become future pharmacists, doctors and engineers; and to transform the classroom experience beyond Black History Month.

Lake Shore Middle School is also participating in the project.

Watch this video; as Team Duval takes you inside the classroom while students perform an experiment and breakdown the oral history archives.