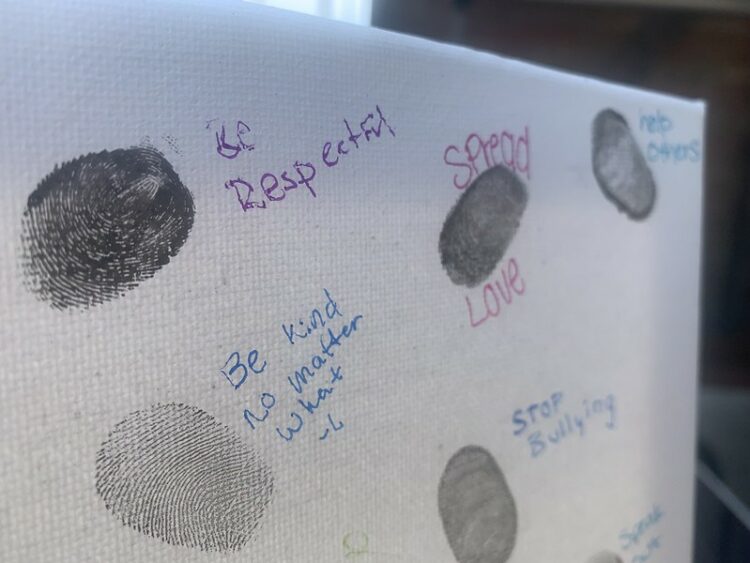 May 9, 2022 – It is one thing to learn about the Holocaust from reading passages in a textbook.

But to stand in an exact replica of a railway car that transported millions of Jews and other victims to their deaths during the Holocaust really hit home for Sandalwood High School student, Mason Mick.

As a senior enrolled in the semester-long Holocaust course, he was versed in its history. But he said the “Hate Ends Now: Cattle Car” mobile exhibit that was brought to Sandalwood’s campus helped him personally understand the suffering of the victims.

“I can’t even imagine what they felt like,” said Mick after he and his classmates went through the exhibit. “They had over 100 people in that one car. It was hot and the smell was probably horrible. Just getting a glimpse of what that felt like was just horrible.”

And that is exactly the point, say organizers with the Jewish Student Union (JSU), an international organization. Bringing attention to the atrocities of the Holocaust is why the local JSU branch in Duval County is bringing the cattle car exhibit to schools across Northeast Florida.

More than 500 students had a chance to participate in the exhibit while it was stationed at Sandalwood, said Holocaust and American History teacher, Patrick Nolan.

“I can’t take a field trip to the US Holocaust Museum in Washington D.C., but I can bring them here to experience this,” said Nolan. “They are having that moment where they can put everything that they’re learning about the Holocaust in one place, and it really kind of gels and comes together.”

First, students enter the rail car, where they see footprints on the floor which represent the hundreds of victims who were crammed into the small space. Then, a panoramic film is shown that captures the experience of several survivors.

After leaving the cattle car, the students are handed ID cards of non-Jewish people who helped rescue Jews and other marginalized victims. They are known as “Righteous Among the Nation” and as students looked at the cards, they were asked to reflect on how they could use their lives to end hate.

For Mick, this experience strengthened his resolve to always speak up for anyone being bullied or mistreated; something he says he has done since middle school.

“If no one steps up, then everyone is going to continue to do it, and then it just gets worse and worse,” said Mick. “Some people stepped up during the Holocaust, but not enough people did, and that’s why it was such a widespread thing.”

Many of Mick’s peers echoed these same thoughts on a large white poster board where organizers wrote the question: How will you make your mark? Their answers included:

For Nolan, the exhibit helps his students deepen their empathy and build a bridge to what they have learned in the classroom.

“We get caught up talking about large numbers like 6 million Jewish people and 5 million non-Jewish people, and a million children who perished,” said Nolan. “Those numbers just don’t mean anything. They’re just unimaginable. But when you see something tangible. When you can be in a railcar like this…and be hot and uncomfortable for just 30 minutes, it really is a tangible connection to what they’re learning.”